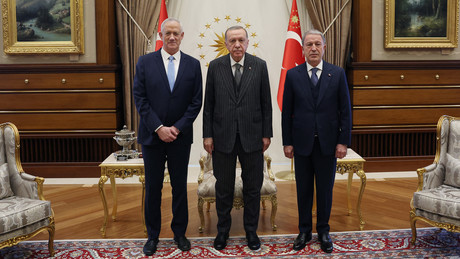 Israeli Defense Minister Benny Gantz met Turkish President Recep Tayyip Erdoğan on Thursday after announcing a gradual resumption of defense ties with Ankara. It was the first visit by an Israeli defense minister to Turkey in about a decade.

Gantz had previously met with Turkish Defense Minister Hulusi Akar. In a joint conference after the meeting, Gantz stated: “This year, thanks to close, covert contacts, we have managed to eliminate an alarming number of threats against Israeli citizens and Jewish people in Turkey.” Gantz added: “We are grateful to President Erdoğan, Minister Akar and the security agencies involved in this crucial, life-saving collaboration.”

In mid-June, Israel said it was expecting attacks on its citizens in the Turkish metropolis of Istanbul by “Iranian agents” after Iranian Colonel Sajjad Chodai, a senior member of the Iranian Revolutionary Guard’s Quds Force, was murdered by Mossad agents in Tehran .

“The Middle East and eastern Mediterranean regions are changing,” Gantz said. Alliances that were unthinkable not so long ago are being built up “in the face of alarming threats like that from Iran.” According to information from Israeli security circles, the renewal of relations took place in coordination with Greece, Cyprus and the USA.

A rift broke out between former allies Turkey and Israel in 2010 after ten Turkish citizens were killed when the Israeli navy stormed a ship carrying solidarity cargo for Gaza. Both Ankara and Tel Aviv also withdrew their respective ambassadors after the US recognized Jerusalem as the capital of Israel in 2017.

More on the subject – NYT report: Israel behind poisoning of two Iranian scientists