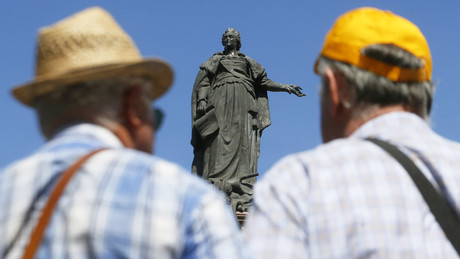 In the Ukrainian port city of Odessa, the monument to Catherine the Great is to be demolished. City residents supported the idea in an online poll. The statue has since been fenced off.

As Gennady Trukhanov, Mayor of Odessa, wrote on Facebook, most participants in an online poll voted for the monument to be dismantled. Now his fate will be examined at the next meeting of the city council. He himself promised to speak out in favor of the demolition and to propose moving the monument to a “Park of the Imperial and Soviet Past”, which is yet to be created. Trukhanov wrote:

“The majority of Odessa residents who took part in the poll supported the idea of ​​​​dismantling the monument from Yekaterininskaya Square. Despite the war that is taking place in our country, we managed to follow the legitimate democratic process.”

The politician thanked all residents of Odessa who took part in the voting.

The survey on the fate of the monument to the Empress, who founded the city at the end of the 18th century, was conducted on the “Socially Active Citizens” platform last month. While the mayor welcomed the “democratic process,” the vote actually doesn’t seem very meaningful. According to the results, fewer than 8,000 people took part. About 3,900 citizens supported the complete demolition and 2,800 voted to leave the memorial in place and add additional historical information to it. Around a million people live in the city.

Construction workers fenced in the monument on Sunday. A note appeared on the fence stating that work was being prepared for the “demolition and relocation” of the monument. City officials have yet to comment.

The monument was erected in 1900. In the 1920s the sculpture went to a museum and in 2007 it returned to Yekaterininskaya Square. After the start of the war in Ukraine there were repeated calls for the monument to be demolished. Rioters had repeatedly attacked it over the past few months. A petition was even launched in July to replace the memorial with a statue of US porn actor Billy Herrington. Ukrainian President Vladimir Zelensky said at the time that local authorities should decide. Although they did not comment on the request, they tried to move the statue back to a museum. However, this application, which was under consideration at the end of September, did not receive enough votes.

Authorities and activists in Ukraine have repeatedly targeted historical monuments, most notably after a 2015 decommunization law. Among other things, it targets sights associated with Russia.

More on the subject – A piece of Berlin in Siberia: Kemerovo opens a replica of the Treptow Memorial