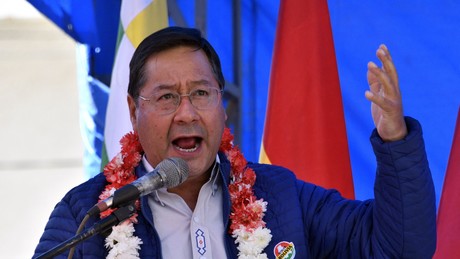 Bolivian President Luis Arce has been in office for two years. Against the background of a widening dispute over a postponed census, he draws up an interim assessment of his government. At the same time, he accuses the opposition of attempts to destabilize it.

On Tuesday, Bolivian President and Prime Minister Luis Arce took stock after two years in office. In his more than two-hour speech in front of the parliament, the politician stressed that it took his government a lot of effort to bring the country back onto the path of stability. This must now be retained. Referring to the widening strike against the postponement to 2024 of a census originally scheduled for this November, Arce said:

“Today we are going through a moment in which certain groups want to destabilize us again. But I am sure that the organization, commitment and awareness of a people who want to move forward, who want to work and continue to grow, will overcome all these adversities. “

Against the background of the violent protests in the province of Santa Cruz, the President pointed out that Bolivia currently has the lowest inflation rate in the region at 1.76 percent and one of the lowest in the world. At the same time, the economy is on a sustainable growth path and the trade balance is positive. In 2021, the Andean country’s economic growth was 6.1 percent, of which 4.1 percent was in the second trimester of the year alone.

Arce concluded that the “negative effects of the recessionary policies” of Jeanine Áñez’s interim government at the top were gradually wearing off. Without directly referring to the dispute over the census date, the politician explained that the current backers of the protests are largely the same groups that supported the coup against President Evo Morales in 2019.

The current political protest in Bolivia essentially revolves around a census originally scheduled for November 2022, which the government in La Paz has postponed to 2024 due to technical problems with the implementation. The leadership of the Santa Cruz region led by Luis Fernando Camacho, on the other hand, is calling for the census to be implemented before the end of 2023. The conflict is about, among other things, new quotas for the parliamentary seats distributed according to the population of the regions. Santa Cruz, as the economically strongest and most populous region, expects to be able to provide more MPs than before in the national parliament due to the census. If the census were not to be carried out until 2024, this would not be the case for the next elections in 2025.