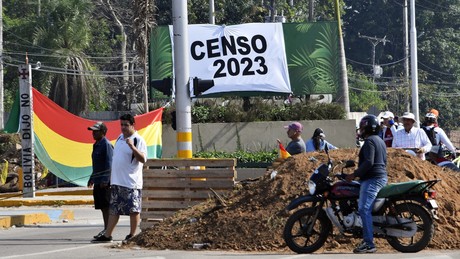 After a 21-day strike in Santa Cruz province, Bolivia’s President Luis Arce has set the date for the next census in the Andean country. The census is scheduled to take place in March 2024, which is later than requested by the opposition. But there is also a concession.

Bolivian President and Prime Minister Luis Arce has ordered the next census to be carried out in the Andean country on March 23, 2024 – about a year later than the opposition had requested. Arce explained in his address to the nation that the dispute over the date of the census had been politically abused by his opponents. The left politician condemned the violent protests in the province of Santa Cruz, in which at least four people died.

“In a democracy, several positions live together. However, a democracy also means that decisions are made in the interests of the majority.”

He also pointed out that the provincial leadership does not speak for all residents, but only represents a part of the local population.

Arce informed that the previous census in 2012 was carried out without taking into account the cartographic changes due. This complex task is currently being implemented. This necessary preparatory measure is one of the reasons why the census originally scheduled for this November has been postponed. At the same time, the President made concessions to the opposition, assuring that the reallocation of quotas in relation to parliamentary seats based on the results of the census will take place as early as September 2024.

The Prime Minister made the decision 21 days after the opposition in Santa Cruz province called an indefinite strike. The protesters called on the government in La Paz to carry out the census by 2023 at the latest so that its results would be taken into account in the 2025 parliamentary elections. The dispute broke out in July when the authorities had postponed the census scheduled for November. Technical problems and the COVID-19 pandemic were given as reasons. The postponement met with criticism in Santa Cruz, as this economically strongest and most populous province in the Andean country could have more MPs in the next parliamentary elections based on the census. Governor Camacho called a council for this Sunday to consider how to proceed.

According to the government, the strike is costing the country US$36 million a day because of related trade, transportation and export problems.

More on the subject – Dispute over census in Bolivia widens: protest actions now in three other provinces