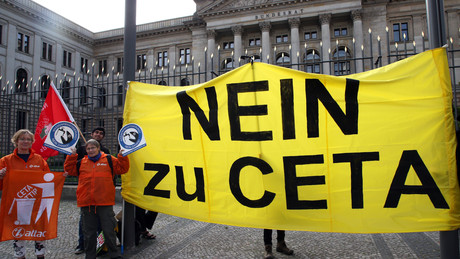 The CETA free trade agreement is due to be ratified this month. Critics have long seen shortcomings in labor law and environmental protection, among other things. In addition, the private-law arbitration enshrined therein threatens to further undermine democracy in the participating states.

According to a press release by the Federal Ministry for Economic Affairs and Climate Protection, the CETA free trade agreement is to be ratified this month.

The CETA free trade agreement between the European Union (EU) and Canada has been in force provisionally since 2017 after the EU Parliament and all governments of the EU member states and Canada had approved it. 16 participating countries have already gone through the ratification process. 13 other countries and the EU as a whole are still pending ratification. Among other things, Germany had not yet signed the agreement with legal effect.

The Verdi trade union warns that employee rights and environmental protection are only partially anchored in the agreement. The service union fears that the rights of wage-earning employees will be dismantled. Another central point of contention is the planned special jurisdiction for the interests of private investors. These would then be entitled to sue the participating states before private arbitration courts. In the event of a loss of hoped-for income as a result of political decisions by the participating states, private investors would have the opportunity to sue for the income and profits they allegedly lost. One concern of the critics is that this would undermine state democratic processes by not implementing democratic decisions for fear of possible investor lawsuits.

The federal government reacted to the criticism and has agreed with the EU Commission and the EU member states on an interpretation declaration of the joint CETA committee, which allegedly should prevent abusive application of the investment protection.

The Munich Environmental Institute had one legal opinion commissioned, which, however, comes to the conclusion that this “interpretation declaration” is legally ineffective. Irrespective of this, the Federal Ministry of Economics is now announcing that ratification is planned for this month.

As an opposition party, Bündnis 90/Die Grünen positioned themselves against both TTIP and CETA. In the meantime, this party has completely turned around in the “traffic light” coalition, although nothing has changed in the underlying contracts and the problems associated with them.

More on the subject – Sovereignty? In short supply in the West…