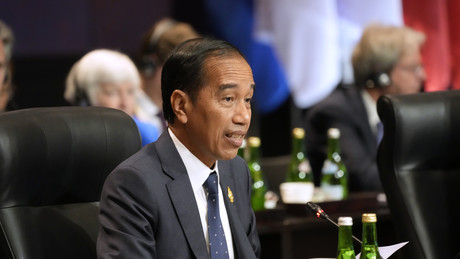 Indonesia’s President Joko Widodo has urged leaders to show responsibility in the interests of humanity despite growing differences. In his view, this means not creating “zero-sum games”.

At the start of the G20 summit, Indonesian President Joko Widodo, as host, pointed out the danger of a new division in the world.

“We shouldn’t divide the world into parts. We mustn’t allow ourselves to get caught up in a new cold war.”

The intensification of global rivalries could lead to the kind of confrontations that characterized the second half of the 20th century, it said.

“We have a responsibility to the peoples of the world,” Widodo appealed to those attending the event. Being responsible also means ending the war. If the war doesn’t end, it will be difficult for the world to move forward, the Indonesian leader said, without explicitly referencing Ukraine.

Widodo also emphasized that the world is currently facing enormous challenges and is experiencing one crisis after the other. The effects are also very noticeable in the food and energy supply.

The Indonesian President called for immediate steps to be taken to tackle the food and fertilizer shortages on the world market. Both problems were exacerbated by sanctions against Russia imposed by Western states after the start of the Russian military operation in Ukraine. For its part, the Russian side announced that Russia is largely unable to export grain and fertilizers as insurance for merchant ships and port services are subject to the punitive measures.

Ahead of the G20 summit, Widodo resisted Western pressure and refused to uninvite Russian President Vladimir Putin. Putin finally turned down Widodo’s invitation and was represented by Foreign Minister Sergei Lavrov. The G20 alliance includes 19 countries and the European Union. The group accounts for almost two-thirds of the world’s population, three-quarters of world trade and four-fifths of global economic power.

More on the subject – G20 in Indonesia: Host demands milder rhetoric towards Russia