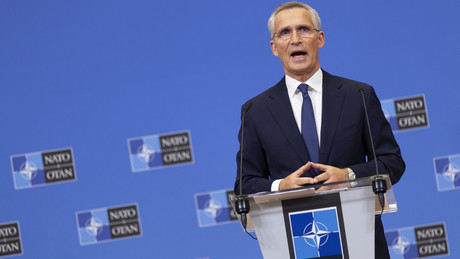 The head of the US-led military alliance said it was probably a Ukrainian anti-air missile that hit Polish territory yesterday – and Moscow does not want to attack NATO. Nevertheless, Stoltenberg claimed that Russia was to blame for the incident.

NATO Secretary General Jens Stoltenberg told reporters on Wednesday that the alliance saw “no signs” that Russia was preparing “offensive military actions” against them. While Kyiv accused Russia of launching a missile attack on Poland, Stoltenberg said the missile likely came from Ukraine.

After a meeting of NATO’s North Atlantic Council, Stoltenberg said the blast that killed two people near the Polish village of Przewodów on Tuesday was likely caused by a Ukrainian anti-aircraft missile.

“We have no evidence that Russia is preparing offensive military actions against NATO,”

he added. Immediately after yesterday’s incident, Ukrainian President Vladimir Zelenskiy blamed Russia for the explosion and described it as a “Russian attack on the collective security” of NATO, of which Poland is also a member. However, US President Joe Biden called this claim “unlikely”, and Polish President Andrzej Duda waived urgent consultations under Article 4 of the NATO treaty, calling the blast an “unfortunate accident” likely caused by a Ukrainian missile.

The Russian Defense Ministry said analysis of debris at the site of the blast revealed that the blast was caused by an S-300 air defense system missile, a Soviet-era system deployed by Ukraine.

Stoltenberg admitted that while the missile came from Ukraine, “it’s not Ukraine’s fault.” According to Stoltenberg, Russia bears “ultimate responsibility as it continues its illegal war against Ukraine”.

The incident came amid a spate of Russian missile attacks on Ukrainian command centers and targets in the power grid. The attacks also cut internet and phone connections across the country, leaving “about ten million Ukrainians” without power, Zelensky said on Wednesday.

More on the subject – Rocket impact in Poland: German media and politicians only know one culprit – Russia