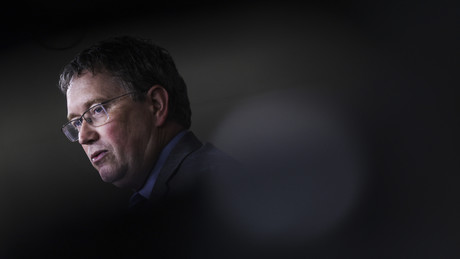 US Congressman Thomas Massie said the US should end military and economic aid to Ukraine as soon as possible. Massie also wants the support that has already been granted to be legally reviewed.

US Republican Rep. Thomas Massie has said the United States should immediately halt military and economic aid to Kyiv, while also opening an investigation into the funds already paid. this opinion brought the politician expressed on Twitter. Massie verbatim:

“We should stop payments to Ukraine immediately and begin a thorough review of the $60 billion that Joe Biden and Congress have already sent there.”

Reuters recently reported that the Kremlin is hoping for a Republican majority in Congress after the midterm elections. Moscow reportedly believes this will make it harder for Biden to approve further military aid packages to Kyiv. The Wall Street Journal added that Republican control of the House of Representatives could complicate the US President’s policy towards Ukraine.

Earlier, US defense expert Harrison Cass pointed to the need to cut funding from Ukraine and find a diplomatic solution to the conflict. According to Cass, military aid can only prolong the armed confrontation in Ukraine.

After Russia launched the special operation to liberate Donbass, the US, UK and EU provided the Ukrainian army with billions of US dollars for military purposes. Moscow has repeatedly pointed out that the West is trying to prolong hostilities in Ukraine. The Russian Defense Ministry stressed that depots of foreign weapons in Ukraine had become legitimate targets for Russian air forces.