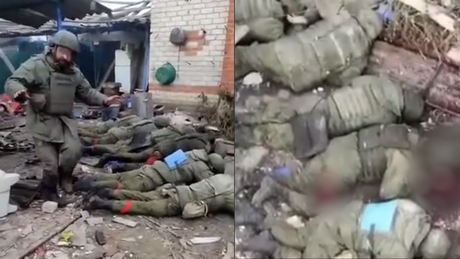 A Ukrainian assault squad has apparently shot dead a group of defenseless Russian soldiers. The Ukrainians themselves posted video evidence of the crime online. The incident happened in the north of the Luhansk People’s Republic during the fighting for the strategically important city of Svatovo.

Russian media reports on an alleged war crime by Ukrainian armed forces with reference to two videos of the Ukrainian military. Both videos have now been picked up by numerous Russian military reporters and on Telegram channels disseminated. One of the videos shows Russian soldiers surrendering. One by one, they walk out of a village house with their hands up and without weapons and lie down in rows, face to the ground. The house is surrounded, several Ukrainian soldiers with assault rifles and machine guns are guarding the prisoners of war.

The Ukrainians are in combat readiness, except for one who records the whole scene with a camera and briefly shows his face. A voice asks the Russians if an officer is with them. There are ten prisoners of war. At that moment, the last fighter to leave the surrounded house starts shooting at the Ukrainians.

“He just wanted to give his life away more expensively,” commented the Russian investigative Telegram channel “Rybar” this action. Apparently he wounded a Ukrainian soldier, because the last seconds of the video shows a young Ukrainian soldier being transported to a field hospital. “Andriy, are you ok?” asks a voice, a message appears: “This is the end of the fairy tale”. The video is accompanied by pop music.

What finally happened to the captured Russian soldiers is shown in another video taken by a drone over the same farm. It shows the sequence of a carnage. Eleven Russian soldiers are lying on the ground, their body position is almost exactly the same as in the first video taken from the ground, but their heads are sinking in pools of blood. Only one soldier lies a little apart.

What happened in between is easy to imagine. The one who refused to surrender was killed in battle, the others were shot, shot in the head. “Rybar” points out that the drone video was first published by the Ukrainians. So this video is a deliberate display of crime by Ukrainian military personnel. Some of the alleged perpetrators are said to have already been identified by “Rybar”.

This channel, run anonymously by a group of Russian journalists, posted photos and names of two Ukrainian soldiers believed to have taken part in the massacre: Artur Bortnichuk and Nazar Mikhailovsky. They should therefore be graduates of the University of the Interior Ministry in Kharkov. According to the Russian TV channel 360 They belong to the 80th Airborne Assault Brigade of the Ukrainian Armed Forces.

The village of Makeyevka in the north of the Luhansk People’s Republic in the border area with the Donetsk People’s Republic and the Kharkov region was identified as the crime scene. This place lies in front of a strategically important road towards the town of Swatowo. Since September, there have been repeated Ukrainian attempts at military advances in this sector of the front.

Similar incidents have happened before in the course of the Russian military operation. The Russian portal Readovka reported on one of the last cases in August, when it published photos of three shot dead Russian soldiers showed. Shortly before her death, according to a video, they were unloaded from a van with their eyes blindfolded and pushed to their knees.

The German Bild journalist Julian Röpcke, recently awarded an Order of Merit by Ukraine by Presidential Decree excellent became, posted on his Twitter channel pictures of the current massacre with the shot Russian soldiers and wrote that the incident must of course be investigated and clarified under the rule of law, “apparently” the Ukrainian soldiers shot the Russian prisoners of war. Even for that he received a lot of criticism on Twitter. Several users accused him of spreading “Russian propaganda” and tried to justify the shooting.

Russia repeatedly accuses Ukraine of merciless warfare, including against its own military personnel. On Thursday, the Russian Defense Ministry said five reservists from a unit of the 81st Airborne Brigade of the Ukrainian Armed Forces were shot dead by a punitive squad in the village of Belogorovka in the Lugansk People’s Republic for refusing to go into the ordered fighting. The Russian authorities have already commented on the latest incident in the village of Makeyevka. The “deliberate and methodical killing of more than 10 immobilized Russian soldiers by direct shots in the head” confirms the vicious character of the Kiev regime and those who support it. The Ministry of Defense pointed out that Ukrainian prisoners held by Russian armed forces, in contrast, are treated strictly in accordance with the Geneva Convention.

More on the subject – Ukraine: Order of Merit for four German journalists – by order of the President