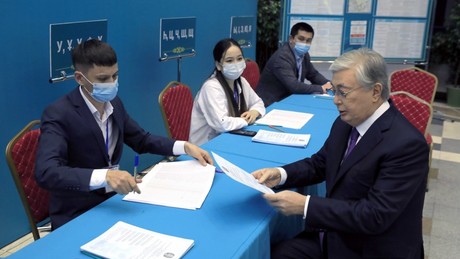 After a constitutional amendment, the early presidential elections will take place in Kazakhstan on Sunday. Head of State Qassym-Jomart Tokayev is standing for the last time. His victory is considered certain. The 69-year-old wants to defend his country’s interests in foreign policy.

A good ten months after the bloody unrest in Kazakhstan that left more than 200 dead, the former Soviet republic, which is rich in oil and natural gas, is electing a new president. The snap election comes after a constitutional amendment that allows the head of state to hold office only once and for a maximum of seven years. The current incumbent Qassym-Jomart Tokayev is thus standing for the last time. His victory is considered certain.

Tokayev cast his ballot in Astana on Sunday morning. After the ballot, he spoke to journalists. The 69-year-old politician described how the Central Asian country should shape its relations in the international arena under the current circumstances. The President pleaded for a multi-vector foreign policy, in which good relations are aimed for in principle with all states. He stressed that Kazakhstan should strengthen its state sovereignty.

“Given our geopolitical position, as well as the fact that more than $500 billion has been invested in our economy and global companies operate in our market, we have an obligation to implement what is now called a multi-vector foreign policy. “

At the end of October, Tokayev announced that his government intends to build a network of trading centers along the borders with Russia, China and other Central Asian countries in the coming years. The politician also repeatedly emphasized that Astana will continue to develop its contacts with ally Moscow, its strategic partnership with China and its extensive cooperation with the other fraternal states in Central Asia.

In his election program, the President formulated the construction of a just Kazakhstan as the main goal. In addition, the current foreign policy course should be continued with the protection of national interests and the strengthening of mutually beneficial cooperation with all interested states. Tokayev pledged to work for peace and security in the international arena.

Around twelve million people are called to vote. So far the voting has been quiet. By noon local time, 38.5 percent of eligible voters had cast their votes.

More on the subject – In Central Asia, Baerbock offers the EU as an alternative to Russia and China