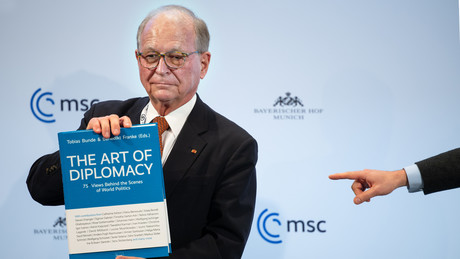 In an interview with Springer-Blatt Bild, the former head of the Munich Security Conference, Wolfgang Ischinger, called for a “war economy” for Germany. He complained that almost no funds had flowed from the special fund of 100 billion euros for the Bundeswehr.

The former head of the Munich Security Conference, Wolfgang Ischinger, advocated a military build-up in Germany: In an interview with Springer-Blatt Bild on Monday, he called for a “war economy” for the Federal Republic. The need for equipment and ammunition for the Bundeswehr and for Ukraine is “urgent and huge”, so one must “set appropriate priorities”. Ischinger complained that the promised special fund for the Bundeswehr has so far paid off almost nothing:

“Since the historic turning point speech by Chancellor Scholz on February 27, 2022, with the announcement of a special fund for the Bundeswehr of 100 billion euros, almost no funds have flowed out of the 100 billion.”

This is due to “budget quarrels, the provisional budget management, bureaucratic procurement law and also fear of criticism from the Court of Auditors,” said the former head of the Munich Security Conference. However, the armaments industry is able to quickly equip the Bundeswehr with military equipment:

“The defense industry could deliver a lot off the shelf if the Department of Defense is now calling for marketable products.”

Because of “bureaucratic obstacles”, however, hardly anything has been called up so far. This will only change if appropriate decisions are made “at the highest political level”, i.e. in the cabinet. Ischinger also sees a political reason for using the term “war economy”:

“Apparently too many have not yet understood that we are only at the beginning of a turning point and that there is actually a real war in the middle of Europe, the end of which unfortunately is not foreseeable.”

If Ukraine is not supported “militarily, financially and humanitarianly,” “Europe will sink into a period of extreme security policy uncertainty for a long time, with consequences that are difficult to assess,” said Ischinger.

More on the subject – Open letter: 70 intellectuals demand weapons and money for Ukraine