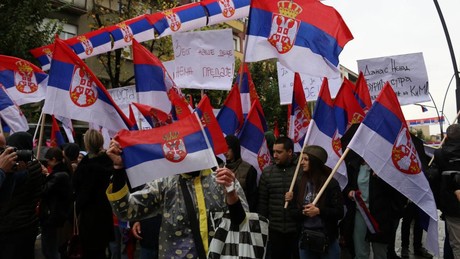 The dispute between Belgrade and its breakaway province of Kosovo over car license plates continues to smolder and threatens to escalate again. Pristina plans to abolish number plates issued by Serbia. Serbian President Vučić is now warning of an outbreak of hostilities.

The situation in the breakaway Serbian province of Kosovo could escalate into “hell on earth” if local authorities don’t reverse their plan to ban Serbian license plates. This was stated by Serbian President Aleksandar Vučić in a television interview on Sunday. His words of warning came a day before a regulation comes into force in Kosovo under which drivers who still use old Serbian-issued license plates will be fined 150 euros.

Kosovo unilaterally declared independence in 2008. To this day, Belgrade does not recognize this. Around 100,000 Serbs still live in the breakaway province. Especially in the north there are many places where the Serbian population has a majority.

By the end of October, according to a regulation in Pristina, all number plates issued by Serbia had to be converted to so-called Kosovar ones. Three weeks were granted as a transitional period, but fines are to follow from November 21st.

The Serbian President and Kosovan Prime Minister Albin Kurti are meeting in Brussels today, Monday. In a talk mediated by the European Union, a final attempt is to be made to avert an impending crisis.

In the interview, the Serbian President emphasized that the Kosovar authorities are responsible for the situation on the ground. According to Vučić, Pristina would have already postponed the decision on license plates if it had really wanted to. But the Kosovar Albanian Prime Minister Kurti showed “that he doesn’t want any Serbs in Kosovo and Metohija”.

In the interview, Vučić pointed out above all that the Kosovo Special Forces (ROSU) had no place in the Serb-inhabited parts of northern Kosovo. The actions of this special unit of the Kosovar police had already caused dissatisfaction among the Serbian population in the past. Violent clashes erupted several times between the local Serbs and the security forces sent from Pristina to carry out certain police actions. The ROSU forces could now also be used to enforce the car license plate regulation. Shortly before the trip to Brussels, Vučić told TV Prva:

“We have done everything to prevent a war, but it is not up to us.”

There could be a “hell on the ground,” said the Serbian president. “In such a case, Serbia will stand by its people and Serbs will defend their homes,” added Vučić.

According to the Serbian politician, peace in the breakaway province depends primarily on “Western pressure” on Pristina. Western states should get Kurti to negotiate with Serbia, according to Vučić. Some, like the US, would do this because they didn’t want conflict. But the Serbian President emphasized that he doesn’t believe anyone else, “especially the Germans,” when it comes to the topic of Kosovo.

Kosovo’s controversial plan to phase out Serbian license plates has been causing tensions between Belgrade and Pristina for months. The plan, which is said to affect around 10,000 motorists in the region, stipulates that the license plates must be replaced with those from Kosovo by April 21 next year at the latest.

Drivers who do not obey the rules will be fined €150, and if they fail to do so again, their license plates and vehicles will eventually be confiscated.

An attempt to enforce the regulation as early as July caused one of the biggest crises in the region in recent years. Diplomats from the EU as well as from the USA could have a temporary mediate solution. That stipulated that in border traffic, the nationality symbols would be covered with stickers on both the Serbian and the Kosovan number plates. The two sides should also continue to negotiate. But in early November, dozens of Serb-born Kosovo government employees resigned after a local Pristina police chief was fired for refusing to enforce license plate measures.

Prime Minister Kurti, who is known as a hardliner, has been trying for months to apply enormous pressure to persuade Belgrade to recognize Kosovo’s independence. The Kosovar-Albanian ultra-nationalist has found support primarily in Berlin.

More on the subject – The Kosovo issue: Pressure is mounting on Serbia, but Belgrade is reluctant to recognize it