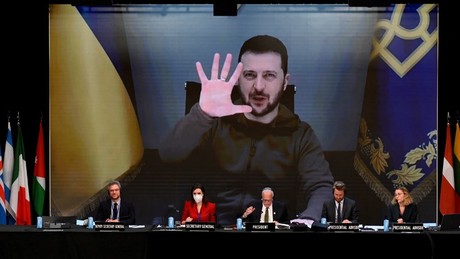 The NATO Parliamentary Assembly has passed a largely symbolic resolution calling on member states to designate Russia as a “terrorist state”. In addition, the body calls for further military support for Ukraine.

Russia should be branded a “terrorist state” – a resolution of the NATO Parliamentary Assembly calls for this. The resolution was passed during the assembly in Madrid on Monday. However, the resolution is not binding.

According to NATO, Moscow poses a “direct threat” to “Euro-Atlantic security”. The meeting also called for more military support for Kyiv and an end to the restrictions on the “forward defense of NATO troops”.

The panel warned that “the Euro-Atlantic area is no longer at peace and that the global security environment has deteriorated rapidly”. Russia’s military operation was condemned “in the strongest terms”.

NATO’s resolution aims to “state clearly that the Russian state is a terrorist regime under the current regime” and “increase military, intelligence, financial, educational and humanitarian support to Ukraine”, including through “accelerated” Weapons shipments.

The NATO bloc must maintain this support “until Ukraine has gained the upper hand,” the resolution goes on to say. All existing restrictions on the “forward defense” of Western forces along Russia’s borders would have to be declared “null and void”.

Washington alone has approved nearly $20 billion in military aid to Kyiv since President Joe Biden took office in 2021, much of it approved after Russia’s military operation began in February.

While calling for more arms to be shipped to Ukraine, NATO also expressed concern that the arms could not be properly traced. The resolution emphasizes the need for such follow-up.

Before the latest resolution was passed, Ukrainian President Vladimir Zelensky addressed the assembly in a video message, praising the alliance for its military assistance and “defense” support for his country.

The resolutions of the Parliamentary Assembly are not binding among NATO members and are intended only to advise the Alliance on urgent issues. The body is “independent of NATO” and has “no direct oversight function” over its policies, according to the body’s website.

The body’s newly elected president, French Senator Joëlle Garriaud-Maylam, called for a tough stance on Moscow on Monday, declaring that the Russian leadership “must be condemned as a terrorist by international courts.”

Accordingly, the Parliamentary Assembly also called on NATO countries to advocate the establishment of an “international tribunal” to prosecute Russian officials for alleged war crimes and to enforce “full reparation for damages and injuries” related to the conflict .

While Kyiv has repeatedly urged the West to declare Russia the “state sponsor of terror,” only a handful of countries — including Estonia, Lithuania and the Czech Republic — have complied, and their actions have been limited to token gestures.

The spokeswoman for the Russian Foreign Ministry had previously condemned a similar move by Latvia as “wild xenophobia”. However, those who would have the power to impose anti-terrorist sanctions against other states, particularly the US, have so far refused to do so.

Monday’s resolution, while largely focusing on Russia and the conflict in Ukraine, also included relations with China. In its statement, NATO calls for a “joint allied response to China’s increasing self-confidence”.

On the one hand, a “constructive dialogue” is called for, but at the same time Beijing’s alleged “systemic challenge to Euro-Atlantic security” is denounced. According to NATO, China is trying to “undermine the rules-based international order”.

More on the subject – Pentagon chief Austin: The outcome of the Ukraine war will shape global security in the 21st century