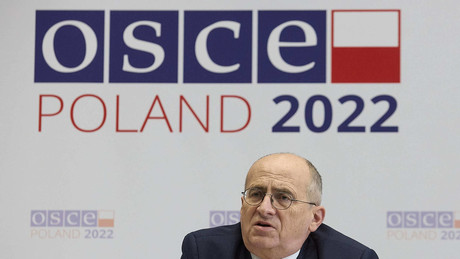 Poland has refused Russia’s Foreign Minister Lavrov the issuance of a visa and thus participation in the forthcoming OSCE ministerial meeting. Kremlin spokesman Peskov has since commented on the process. He sees the OSCE as permanently damaged.

The fact that Russian Foreign Minister Sergei Lavrov was not invited to the forthcoming OSCE summit is having more and more impact. The Polish city of Lodz is this year’s venue for the annual Ministerial Meeting of OSCE States. The meeting is scheduled for December 1st and 2nd in the Polish state of Lodz. At their annual meeting, the foreign ministers of the member states discuss security policy issues affecting Europe.

Poland has refused Lavrov entry on the grounds that he is on the EU sanctions list. The process is unusual.

Meanwhile, Russian Presidential Spokesman Dmitry Peskov commented on Poland’s refusal. The OZSE is said to have been permanently damaged as a result. Peskov said no harm could be done to Russia or Lavrov, but the uninviting would be a headache for the OSCE in the future.

Peskov pointed out that it was the OSCE, among others, that rejected a constructive talk on security guarantees for Russia earlier in the year.

The Russian delegation had previously been refused visas. The delegation wanted to attend the OSCE Parliamentary Assembly. Russia speaks of systematic attempts to hinder the work of its representatives at the OSCE.

The OSCE emerged from the Conference on Security and Co-operation in Europe (CSCE), which during the Cold War offered a discussion format between the Warsaw Pact states and the NATO states on conflict prevention and regulation. One of the tasks of the OSCE is to discuss security issues among the European states and to resolve crises among the member states diplomatically. With the exclusion of Russia, the OSCE loses its relevance.

The EU repeatedly gets itself into pithy diplomatic situations by sanctioning people or not recognizing their political position, with whom it feels compelled to negotiate at a later point in time.

More on the subject – Elections, sham elections – Western media get caught between wishful thinking and reality