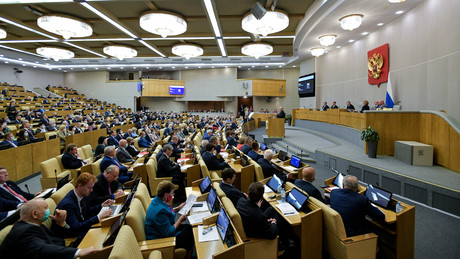 Several videos on social media show Ukrainian troops allegedly killing Russian prisoners of war. In a statement, the State Duma is now calling on the parliaments of all countries to condemn the crimes committed by the Ukrainian armed forces.

Last week, videos surfaced on social media showing several Russian soldiers lying on the ground, guarded by Ukrainians. Then shots are heard. Another shot shows almost a dozen bodies. The pictures are said to have been taken in the Lugansk People’s Republic in mid-November.

Now, at a plenary session on Tuesday, Russia’s State Duma issued a statement calling on members of parliament around the world to condemn Kiev’s crimes. “The deputies of the State Duma appeal to the parliaments of all states of the world to unequivocally condemn the crimes of the Kiev regime and to help bring to justice the direct perpetrators of inhumane murder, as well as their sponsors,” the statement said. They appealed to the collective West to “refuse to support neo-Nazi ideology”.

The document was presented to the State Duma on Monday. Accordingly, the MPs were “outraged at the news of another bloody crime by the Kiev regime, the shooting of captured Russian soldiers”. According to MEPs, the deliberate killing of prisoners of war constitutes a serious violation of international humanitarian law, including the 1949 Geneva Convention on the Treatment of Prisoners of War.

The New York Times described the videos as authentic. The exact course of the incident and its background are still unclear. Kremlin spokesman Dmitri Peskov announced that Moscow itself would search for the Ukrainians responsible: “They must be found and punished.” The Russian investigative committee had previously launched criminal proceedings into the execution.

Kyiv, on the other hand, argues that the killing of the Russians was an act of self-defense, since one of the enemy soldiers suddenly opened fire. By faking their surrender, the Russian fighters themselves committed a war crime.

More on the subject – NYT: Videos of alleged killings of Russian soldiers are real