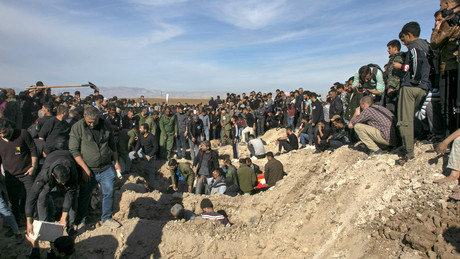 After Turkey launched an airstrike on Kurdish areas in northern Syria and Iraq on Sunday, Berlin called on Ankara to act “proportionately” while upholding international law. The reports of civilian casualties are “worrying”.

In view of the massive air raids on Kurdish areas in northern Syria and Iraq, the German government has called on Turkey to uphold international law. Foreign Office spokesman Christoph Burger said on Monday in Berlin:

“We call on Turkey to act proportionately while respecting international law.”

This includes, in particular, that civilians must be protected. The spokesman described the reports of civilian casualties in the Turkish airstrikes as “extremely worrying”:

“Like everyone else involved, we call on Turkey not to do anything that would further aggravate the already tense situation in northern Syria and Iraq.”

At least 35 people were killed in nearly 25 attacks in northern Syria’s Aleppo, Raqqa and Hasakah provinces, according to the Syrian Observatory for Human Rights. The Kurdish authorities put the number of dead at 29, including eleven civilians. Thousands of people attended the funeral of victims of the Turkish attacks in the city of al-Malikiyah in north-eastern Syria, the AFP news agency reports.

Turkey launched a long-planned “military offensive” against Kurdish units in northern Syria on Sunday. According to the Turkish Defense Ministry, the attacks were directed against bases of the Kurdistan Workers’ Party (PKK) and the Syrian-Kurdish organization YPG. The Turkish government classifies both groups as “terrorist organizations”.

Turkey cited the attack on Istanbul’s İstiklal shopping street on Sunday a week ago as the reason. Although the investigation has not yet been completed, the Turkish government considers it proven that the YPG and PKK are behind the attack. Burger explained that the federal government takes available information on the responsibility of the PKK or groups associated with it “very seriously”. According to experts, however, the attacks are only the reason for the military operation, which Ankara has been talking about for a long time.

After the airstrikes, Turkey is now taking military action in northern Syria – Turkish President Recep Tayyip Erdoğan is also considering a ground offensive. There is no question that one does not limit oneself to air operations, he emphasized. The Turkish Defense Ministry tweeted on Monday that it would continue to “settlement”.

The Green politicians Jürgen Trittin and Max Lucks declared that the attacks by the Turkish air force violated international law. Even the reference to the attack and the right to self-defense under Article 51 of the UN Charter, with which Turkey justified its actions, does not change anything. Left-wing politician Sevim Dağdelen wrote on Twitter:

“Erdogan is bombing Kurds + Syrian army. The German government is silent on the aggressive war of the NATO partner NATO partner. No condemnation. The press sometimes euphemistically speaks of a ‘military offensive’. -Where is the outcry against this aggressive war?”

Federal Interior Minister Nancy Faeser (SPD) traveled to Turkey on Monday. As her ministry announced, she will “address all current issues relating to security and migration” during her visit. However, it is considered unlikely that there will be any serious consequences for Turkey.

More on the subject – Airstrikes by the Turkish army in Syria: Kurdish militias warn of “major disaster”