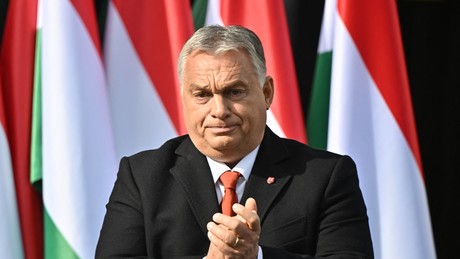 The Ministry of Foreign Affairs in Kyiv wants to summon Hungary’s ambassador after Prime Minister Viktor Orbán showed up at a football match wearing a “Greater Hungary scarf”.

Kyiv does not want to put up with the fact that Hungarian Prime Minister Viktor Orbán wore a “Greater Hungary scarf” during the Hungary-Greece game on Sunday. It showed the borders of the former Kingdom of Hungary, which included the areas of today’s Austria, Slovakia, Romania, Croatia, Slovenia, Serbia and Ukraine, among others. On June 4, 1920, the Treaty of Trianon, enforced by the victorious powers of the First World War, was signed. At that time, Hungary had to cede around two thirds of its historical territory to newly founded nation states.

The spokesman for the Ukrainian foreign ministry, Oleg Nikolenko, announced on Facebook on Tuesday that the Hungarian ambassador would be summoned and made aware of the “unacceptability of Viktor Orbán’s actions”.

“The promotion of revisionist views in Hungary does not contribute to the development of Ukrainian-Hungarian relations and does not correspond to the principles of European politics.”

The Foreign Office of Ukraine demanded an “apology” and clarification that there are no Hungarian claims to Ukrainian territory. Criticism of Orbán’s scarf also came from Romania, where the largest Hungarian minority – around 1.5 million members of the ethnic group – lives. The Foreign Ministry in Bucharest spoke of a “revisionist statement”.

Relations between Kyiv and Budapest are already tense because Orbán has long questioned Western support for Ukraine. The Hungarian prime minister recently spoke out against the EU bailout loan for Ukraine. According to him, the EU countries should distribute the total amount earmarked for Ukraine “appropriately and fairly” among themselves.

“Hungary does not agree that EU member states should jointly provide loans to support Ukraine.”

“This is not our war,” Orbán had repeatedly emphasized in relation to the Ukraine conflict. Hungary’s head of government claimed that this would never have happened if US President Donald Trump and German Chancellor Angela Merkel had stayed in power. The Ukrainians would never win, the sanctions imposed by the West would not bring Russia to its knees.

More on the subject – “No parking for illegal immigrants” – Nehammer, Vučić and Orbán for stemming migration