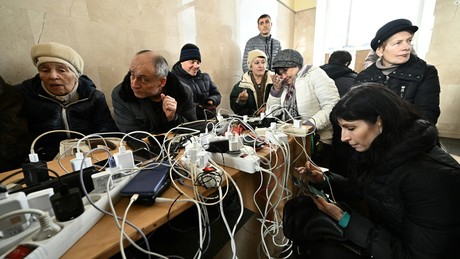 According to Vladimir Zelenskiy, more than 4,000 so-called “points of imperturbability” have been prepared in Ukraine. These are warming rooms where the population can find shelter in the event of a power cut and receive free services.

According to the Ukrainian president, 4,000 so-called “points of steadfastness” have been prepared nationwide so far. Selenksky said on Wednesday night that power failures would occur again as a result of further attacks by Russian forces. All basic services are provided there free of charge around the clock: electricity, mobile communications and internet, heating, water and first aid. A map with all the addresses can be found on a specially set up website. You have to be prepared for every scenario, emphasized Zelensky. “I’m sure we can all get through this winter together if we help each other.”

In an interview with the Bild newspaper, Kiev’s Mayor Vitaly Klitschko warned that one had to be prepared for the “worst scenario” of widespread power failures at low temperatures:

“Then parts of the city would have to be evacuated, but we don’t want it to get that far.”

Russia has carried out multiple rocket attacks on Ukraine’s critical infrastructure in recent weeks. In many places there are interruptions in the electricity and water supply. The Office of the President of Ukraine recently announced that the energy supply situation is critical. Almost all large hydro and thermal power plants in Ukraine were damaged. Because of this, shutdowns are necessary to stabilize the system and maintain a balance between consumption and production. Selenksky calls on citizens to save energy.