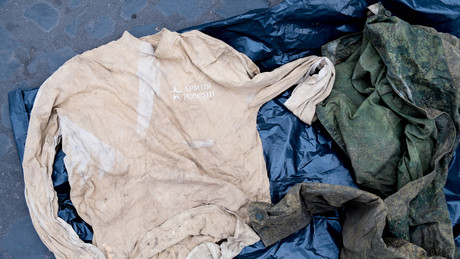 Ukraine opens criminal proceedings against recently executed Russian prisoners of war. The Russian soldiers who were shot are accused of faking a surrender. Horrific videos of the massacre of the soldiers lying on the ground have been circulating on the internet for a few days.

In this regard, it should be noted that the Ukrainian Prosecutor’s Office initiated this case under Article 438 Part 1 of the Criminal Code (violation of the laws and customs of war). This provides for a prison sentence of 8 to 12 years – for the murdered Russian men. Even more cynical is the fact that this article of the Ukrainian penal code also provides for punishment for the cruel treatment of prisoners of war.

A video of the act posted on social media on November 18 showed up, shows men in what appear to be Russian military uniforms coming out of a house and lying on the floor. They are followed by men in uniforms with yellow armbands – they are believed to be members of the Ukrainian armed forces. The surrendering soldiers are asked which of them is an officer. Then shots are heard and the video is interrupted. There is also a second video, captured by a drone, showing 12 bodies with blood-like smudges visible next to them.

From the Russian Ministry of Defence became called the footage “video evidence of a massacre of unarmed Russian prisoners of war by Ukrainian military personnel”. The Russian investigative committee initiated criminal proceedings. The Kremlin promised that those responsible for the shooting would be found and punished. If necessary, international organizations would also be involved in the process, according to Kremlin spokesman Dmitry Peskov.

Farhan Haq, the deputy spokesman for the UN Secretary-General, commented on the surfaced footage of the shooting of Russian prisoners of war in Donbass. He stressed that reports of these crimes should be thoroughly investigated. The UN, to which Russia addressed this concern, has already begun examining the video footage.

More on the subject – “Except for Russia, no one will care about it”: Another execution video has surfaced