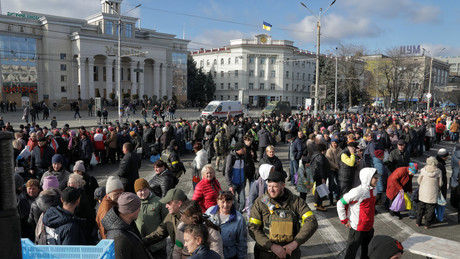 Videos from Kherson and the surrounding villages, in which pro-Ukrainian citizens are said to warmly welcome the fighters of the Ukrainian armed forces, are increasingly appearing on the Internet. Often with flags, a little less often with flowers. How widespread is this phenomenon, how are such videos created for Zelensky’s office, and what conclusions should Russia draw from this?

Numerous Ukrainian flags appeared in central Kherson on Friday morning. Social media reported mass actions involving locals who crowded the street to salute the Ukrainian terrorist militia. The actions themselves began several hours before the Ukrainians marched into the city. Videos later surfaced on social media, with people shouting “Ukraine, Ukraine!” chant The same can be observed in other districts on the right bank of the Dnieper in the Kherson region.

In this regard, many people asked themselves a question: if Kherson is a Russian city where Russian troops were only yesterday, where did dozens of these people with Ukrainian flags, who feel fraternal with the enemy troops, come from? And how is this type of video created?

“The secret is simple. First, the Ukrainian armed forces march into a settlement without a fight, calling this process ‘liberation’ and accompanying it with the appropriate media hype. Beforehand, the Ukrainian secret service arranges to meet local activists from pro-Western parties via messenger apps to confirm the arrival of the Ukrainian Armed Forces. And the activists themselves, as you know, have been working as informers all these months, collaborating with the domestic intelligence service SBU and military intelligence service HUR,” Kiev political scientist Alexei Nechayev told the Vzglyad newspaper.

“Where do activists like this come from? That’s easy too. Even the weakest Ukrainian party has its own network of party organizations at the grassroots level. For every 2,500 citizens (that’s the standard for a constituency by Ukrainian standards), there are three to ten activists who are constantly are in contact with their officials in the district, the city and the region,” the interlocutor continued.

“It gets even easier from there. Useful information is passed ‘up’ by the activists, as are instructions ‘down.’ Problem. You can also report a neighbor or shoot a video about how certain processes are being sabotaged in the conditions in the village of Malinovka. The cost of the Ukrainian side for such a show is small, but the result is such that the whole of Russia is discussing it.” , the expert continues.

Alexander Malkevich, a member of the Russian Public Chamber and head of the journalism department at Kherson University, added that Russia had been very kind to the “jubilant”. “We have not imposed any draconian measures against pro-Ukrainian citizens. What is happening now is the flip side of our loyal attitude towards the enemy and his supporters,” Malkevich said.

We also cannot say for sure how many of those involved in such actions are actually residents of Kherson. “It must be admitted that the Ukrainian side has a well-functioning media system. They could bring people with them, and the ‘cheerers’ had the task of preparing the necessary identification signs and props,” the interlocutor explained.

“In addition, the presentation of the material is also important. A small action can be presented as a mass action. The main thing is the camera angle. These videos are professionally filmed, but at the same time appear as if they were shot randomly and with a mobile phone. In “Truth, everything revolves around one point in Kherson, which is the central square. Even 40 people can give the impression of a mass gathering there,” he stressed.

“Perhaps some residents of Kherson sat in relatively comfortable conditions, waiting for the Ukrainian troops to arrive, because there was no serious fighting for the city. But I imagine that some people were also just taken there, for a show,” says political scientist Vladimir Kornilov.

“No one asked if there were supporters of the Ukrainian armed forces in Kherson and are still there. Some of them, I assume, greeted the arrival of the Russian troops in the same way. Now they greet the Ukrainians and hope that they will be greeted by will not be prosecuted by the Ukrainian authorities. Unfortunately, this will not save the city from serious cleansing,” Kornilov regrets.

At the same time, Nechaev believes that the atmosphere on the right bank of the Dnieper in the Kherson region is now reminiscent of the plot of the operetta film “Wedding in Malinovka”. “Again a change of power” is the central leitmotif, which reflects the reality there, where each district has its own “Ataman Grizian Tawritscheski”.

“In addition, the frequent changes in power, whether in the country or in the city, always have an effect on the demonstrative patriotism of the population. The young people who yesterday took part in a concert of the party ‘United Russia’ would like to be able to sing again tomorrow like ‘Bandera is our father, Ukraine is our mother’, sung by roaring singers in folksy embroidered shirts,” admits the expert. “Should you scold people for participating in flash mobs like this? No.”

“In a situation of ‘partial civil war’, as Vladimir Putin called it in the Valday club, local people survive as best they can. In the conditions of the approaching winter, ordinary people don’t care who comes to the city: Russians or Non-Russian, red or white, Petlyura supporters or those of Nestor Makhno, this attitude has always existed in these regions, especially during times of civil war, so the problem of the ‘jubilant’ is solved by ending this struggle victoriously . We have to work on that,” Netchayev is convinced.

More on the subject – Landshut: A little dance about freedom of expression