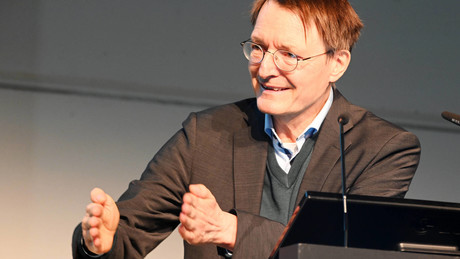 The federal budget for 2023 generously takes into account the further ghost trip of the Federal Minister of Health. A ministry spokesman justifies the money rush with the now self-evident subjunctive possibility argument. Lauterbach confirms: “The vaccination no longer protects against infection”.

The incumbent federal government, across all ministries, is badly lacking in intellect, reason and credible lines of argument. One thing, however, can already be stated soberly, that there seems to be enough money in almost endless amounts in the state coffers. Investments in the billions in the future here, solidarity in the billions there – how much does this colorful world cost when I, the partly unskilled minister, can dispose of any sums X in an arrogant, baseless and irresponsible manner. And with the knowledge that you will never be legally prosecuted for it.

So now it comes to the next questionable chapter of the consistently unsuccessful government district soap, the title this time: “May it be a bit more?” The Federal Minister of Health, Karl Lauterbach, got in touch right away. According to available internal information from a “result list for the federal budget 2023”, the news site Business Insider (BI) reports on the following plans of political madness for the year 2023:

“Federal Minister of Health Karl Lauterbach (SPD) will have at least 60 million euros available for corona PR measures alone in the new year. There will also be 2.9 billion euros for further vaccine to order against Covid-19.”

Bad soap series in the public service media can at least be shut down if disapproved. Irresponsible politics must be endured by the citizens – regardless of their health. According to information from Business Insider, at least the CDU parliamentary group in the Bundestag had “appealed against both budget items”. But Lauterbach doesn’t care about that, and neither do responsible FDP ministerial colleagues for the last 100 days of a collaboration.

According to the BI article, the chairman of the budget committee of the German Bundestag and former chancellery minister of the Merkel era, Helge Braun, commented on the figures as follows:

“The almost 2.9 billion euros just for Sars-Cov-2 vaccine purchases are an enormous sum in the budget. I have therefore strongly warned that the federal government is in intensive talks with the European Union in order to jointly sign the contracts with the vaccine manufacturers to revise.”

Of course, a Mr. Braun from the CDU also knows that there is not much to be gained from Ms. von der Leyen, also CDU. It would be more interesting to ask the chairman of the budget committee whether he was only concerned with the purchase price when he criticized the total sum, or whether he was also critically questioning the renewed investment in vaccines and campaigns. Braun knows full well that a Lauterbach minister would do a hell to intervene in the revision of vaccine contracts. According to the BI, the “Union attempt to block” was unsurprisingly overruled with the votes of the traffic light groups.

What are the reasons for the allegedly required millions of taxpayers’ money? According to the article, a spokesman for the Federal Ministry of Health (BMG) explains:

“For the autumn/winter of 2022/2023, experts expect a further increase in the number of infections. In addition, the highly contagious variants could not only lead to waves of infection in the cold season, but ‘this danger remains all year round'”.

could? The BMG and Lauterbach therefore assume:

“(…) that in 2023 there will still be a need to ‘inform people comprehensively about the health hazards associated with Corona and to motivate them to take advantage of the vaccination offers and to observe protective measures such as wearing an FFP2 mask'”.

billion euros for FFP2 masks proven ruined by bad politics since 2020. Consequences – zero. Billions of euros have already been invested in very conditionally effective active ingredients. Until the end of 2022 bum almost 80 million doses distributed to various federal warehouses with prompt expiry dates. According to the BMG, “by September 2022, a total of around 6.2 million vaccine doses in the central warehouse (…) had expired”. Most recently, only 4,000 people were vaccinated against a corona infection a day. About a year ago in December 2021 arranged for Lauterbach to order 92 million more vaccine doses. Of the total of 554 million vaccine doses ordered since 2021, the majority were only ordered this year or will be in 2023 delivered.

These are all realities that the responsible ministries are aware of, at least I hope so. Lauterbach also intends to “inform about the health hazard associated with Corona” in 2023. Educate about what? What do people not know yet, what “minister subjunctive” in the context of his difficult to bear alarmism and penetrating certainty? Incredibility and contradictions included.

As a reminder: The federal government’s first Corona campaign package, for the Corona warning app, for the dissemination of the distance and hygiene rules (AHA rules) and the three anti-action films “Special Heroes” cost almost 16 million euros. Karl Lauterbach was responsible for the “Vaccination helps” campaign Further 38 million euros due. The recent flop campaign “I protect myself” burdened taxpayers with around 32.7 million euros. Appropriately for the soccer World Cup, the face of the day for the 84 actors, former soccer professional Thomas Hitzlsperger, announces that he is protecting himself from “Fair play“-reasons and sportsmanship. Wasn’t it originally about purely medical indications?

In a November 8 tweet, a senior minister in Lauterbach dared to use the word “probably” twice in one post. It remains unbelievable:

Very good analysis of the SarsCov-2 variant situation for winter. BQ.1.1, variant that could probably come, mutates very close to BA.5. That’s probably how our new BA.5 vaccines work well. This is also indicated by the first studies. Preparation ok so far https://t.co/BLpjkLvCAE

On November 23rd confirmed Lauterbach is a matter of course for ZDF:

“Vaccination no longer protects against infection.”

Above all, the “new variants” of the corona virus “cannot be detected” by the current vaccine, said the minister, as usual, oracularly, because he knows – as so often – that he knows nothing and can only guess again. “Whoo boo” – the variant ghost “haunts merrily”, but only in the dubious world of thoughts of Karl Lauterbach. The taxpayer should now again generate so much money for this?

This spook must be brought to an end as soon as possible. It almost doesn’t matter who gives his ministerial key first, whether it’s the supporting Minister of Finance Lindner (FDP) or the ghost hunter Lauterbach. It would only have to be started promptly, in this case for the benefit of state finances and also – demonstrably and documented – also to protect and pacify the people in the country.

More on the subject – Pfizer documents: What the company and authorities knew about the risks of mRNA preparations