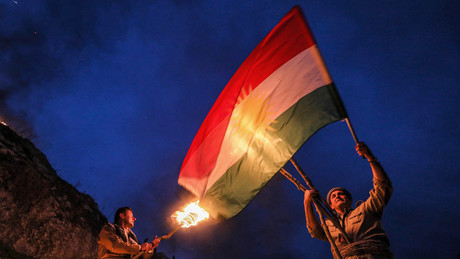 Tehran and Ankara have been threatening a ground offensive in autonomous Kurdish areas in their neighborhood for weeks. The Kurdish question is not only about combating the destabilizing factors, gas production in the autonomous region of Kurdistan also plays a role. This is where the geopolitical interests of Iran and Turkey intersect.

Since Sunday, Turkey has been flying airstrikes in Syria and Iraq on Kurdish militia positions that the Turkish government blames for the November 13 attack in central Istanbul. Targets are attacked in regions that are under the control of the Syrian Kurdish militia YPG. The situation is currently escalating, as Iran has repeatedly attacked northern Iraq with ballistic missiles and combat drones since mid-September. Tehran targeted Kurdish separatist groups active in northern Iraq with these airstrikes, accusing them of instigating the recent unrest in Iran.

Tehran and Ankara have been threatening a ground offensive in the autonomous Kurdish regions in their neighborhood for weeks. Like now known was, the boss had the Quds unit of the Iranian Revolutionary Guard, Esmail Ghaani (successor of the murdered Qassem Soleimani), threatened to invade northern Iraq during a visit to Baghdad last week if the Iranian-Kurdish separatists in their retreat were not disarmed. Ghaani called on the Iraqi government to station Iraqi army soldiers on the border with Iran to stop arms smuggling by the Kurdish factions KDP and comala to finish Iran. In recent days, Iran has been overshadowed by a series of terror attacks in several cities carried out by armed Kurdish militias. Tehran has accused the West of wanting to foment civil war in the country by organizing arms smuggling into Iran from Kurdish areas in northern Iraq.

Following Erdoğan’s orders, the Turkish army has recently launched massive airstrikes on the Kurdish autonomous regions in Syria and Iraq. Turkey accuses the US of YPG, the Syrian offshoot of the banned Kurdish Workers’ Party PKK. It is precisely this group that was held responsible for the most recent terrorist attack.

The Kurdish question is not only about combating the destabilizing factors, it is also about gas production in the autonomous region of Kurdistan. This is where the geopolitical interests of Iran and Turkey intersect.

Since Russia’s military operation in Ukraine, Turkey has aimed to turn its country into a hub for exports to Europe. While Turkey is currently trying to make itself a market for Israeli gas, Ankara is also flirting with the option of supplying gas from Kurdish areas in northern Iraq or even from northern Syria to Turkey, for further delivery towards Europe via a middle transport corridor. Amid escalating tensions between Russia and the West over Ukraine, Erbil stepped up efforts to expand its energy ties with Turkey.

The President of the Autonomous Region of Kurdistan, Nechirvan Barzani, met with Turkish President Erdoğan in Ankara at the beginning of February. The Kurds then announced that the gas connection to Turkey would be operational in 2025. In mid-February, the Iraqi Federal Court of Justice declared the Iraqi-Kurdish oil and gas law invalid. In July, the Iraqi oil minister accused the Kurdish autonomous government in northern Iraq of conducting illegal oil deals with foreign companies.

Tehran does not tolerate gas production by the autonomous Kurdish government in northern Iraq because the gas export plan could, among other things, threaten Iran’s place as a major gas supplier to Iraq. Tehran is even willing to use force to avert a possible agreement between Kurds and the West or Turkey. Iran fired 12 rockets at a mansion in Erbil in April. This villa is said to belong to Baz Karim Barzanji, a Kurdish energy businessman. There are said to have previously been two meetings between Israeli and US energy officials at the villa to discuss transporting Kurdish gas to Turkey via a new pipeline. Iran will do everything possible to prevent a middle transport corridor under Turkey’s control towards Europe.

Finally, it should be noted that Iran is trying to legitimize its operation in Kurdish areas by colluding with the central government in Baghdad. Turkey, on the other hand, has so far carried out three invasions of Syria without ever having obtained a mandate from the Syrian government.

More on the subject – Attack on “Mossad office” in Erbil: revenge for the killing of Iranian officers in Syria