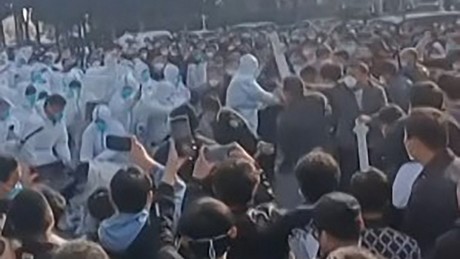 On the Foxconn factory premises, workers are rebelling against their working conditions in the face of rigid corona measures. A lockdown was declared around the Chinese plant of the Apple supplier. Parts of the workforce are thus allegedly “locked up”. Now there were demonstrations again.

The plant in Zhengzhou is one of the most important production sites for Apple’s iPhones. About half of all iPhones shipped worldwide are manufactured in Foxconn’s sprawling factory complex. Up to 350,000 people are employed on the factory premises. Due to its size, the site is also called “iPhone City” called.

Since the factory since October due to a corona-outbreak is under lockdown, there have been regular protests and riots in this largest supplier plant for Apple in the past few weeks. In view of the measures prescribed, some employees tried to get out of the closed-off factory premises to flee. Now it should be loud on Wednesday of this week media reports there have been massive riots on the grounds of “iPhone City”. Videos on social media are said to document the events:

According to the media, the iPhone 14 model has already been produced as a result of a labor shortage in recent weeks driven back because a COVID outbreak had led to a partial closure of the site due to the prescribed daily corona tests for all employees. In addition, parts of the workforce were sent back to their hometowns.

In an official opinion The “Hon Hai Technology Group (Foxconn) on the videos in the social media about unrest in Zhengzhou” says about the events that the recent dissatisfaction of the employees would only relate to the wage situation and a promised work allowance. The notification goes on to say:

“The company emphasized that the allowance was always paid on the basis of the contractual obligation.”

At the end of October, after workers at the site were sent away or drove away themselves due to the increasing number of positive corona cases, the company responded by recruiting new employees with the promise of generous bonuses recruited. Regarding the rumors circulating in the media that the protests are also related to the restrictive corona measures, the company writes:

“Foxconn clarifies that online speculation about employees being COVID positive and in the dormitories at the… Zhengzhou Park Campus live, are simply untrue. Before new employees move in, the surroundings of the dormitories are disinfected as standard, and only after the premises have passed official checks are the new employees allowed to move in.”

Since the emergence of COVID cases and increasing numbers of positive test results, the company has “introduced a so-called closed circuit in the factory, which isolates it from the city of Zhengzhou because a COVID outbreak has occurred there,” Britain’s BBC said in its reporting about the events. The affected employees are no longer allowed to leave the factory premises.

Workers have broken out of #Apple‘s largest assembly site, escaping the Zero #covid lockdown at Foxconn in #Zhengzhou. After sneaking out, they’re walking to home towns more than 100 kilometers away to beat the Covid app measures designed to control people and stop this. #Chinapic.twitter.com/NHjOjclAyU

earlier this month informed Apple now states that “due to the production interruption in Zhengzhou, fewer deliveries of iPhone 14 models” can be expected:

“The facility in Zhengzhou, China is currently operating at a significantly reduced capacity. As has been the case throughout the COVID-19 pandemic, the health and safety of workers in our supply chain is our priority.”

The People’s Republic of China continues to pursue a strict zero-COVID strategy that is very controversial in terms of effectiveness. This continues to include the strict implementation of lockdowns, daily mass tests, strict controls with contact tracing and prescribed quarantine measures. However, the current numbers of new infections have increased again in the past few weeks in a very manageable range.

More on the subject – Chinese Ministry of Defense: “US is undermining one-China principle”