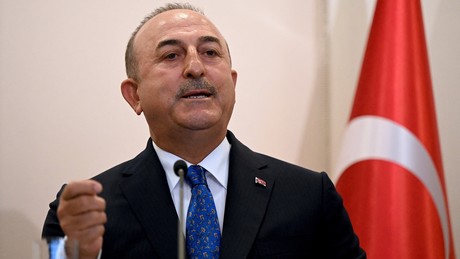 Moscow and Kyiv will definitely have to sit down at the negotiating table, said Turkish Foreign Minister Mevlut Çavuşoğlu. Otherwise the fighting in Ukraine would last for decades.

At an event in Ankara, Turkish Foreign Minister Mevlut Çavuşoğlu warned of the “danger of decades of war” in Ukraine. This will happen if there are no talks between Moscow and Kyiv, the minister said at an appearance at Bilkent University in Ankara.

“One way or another, this war will end at the negotiating table. We don’t think it will end with military advantages on the ground.”

Çavuşoğlu also said that during talks in Istanbul this spring, Russia and Ukraine were “very close to a ceasefire” before moving away from the negotiating table. Since then, there have been no negotiations between the conflicting parties. Reality has become more complex, admitted Çavuşoğlu. Ankara wants to continue trying to find a diplomatic solution.

“Being a NATO country does not mean that we cannot hold meetings with Russia or other countries,” the Turkish foreign minister said. In this regard, his country must keep the balance. He described the modern present as an “age of uncertainty”. A “unipolar system” that emerged after the collapse of the Soviet Union proved to be short-lived. A “rapid development towards a multipolar world” has begun. Çavuşoğlu spoke of a global search for a system identity.

Russian President Vladimir Putin has repeatedly stated that Russia is ready for negotiations with Ukraine without any preconditions. However, Kyiv has now banned talks with the Russian head of state. President Selensky signed a corresponding decree in early October. This was Kyiv’s reaction to the inclusion of the Cherson and Zaporozhye regions and the Donetsk and Lugansk People’s Republics in the Russian Federation. In recent days there has been much speculation about preconditions for peace talks in the Ukraine conflict. Moscow always emphasizes its readiness for dialogue, but without any preconditions.