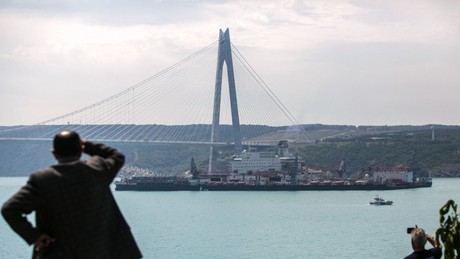 The RIA Novosti news agency reported on Thursday, citing the regional FSB press center in Volgograd, that the Russian security service FSB said it had prevented an act of sabotage allegedly being prepared by Ukraine on a section of the South Stream gas pipeline in the Volgograd region.

The affected section of the South Stream gas pipeline supplies gas to the Turkish Stream pipeline, making it one of the last remaining options for supplying Europe with Russian natural gas.

Four alleged perpetrators, all Russian nationals, are said to have been arrested. The searches seized four magnetic mines, four kilograms of plastic explosives, delay detonators, 593,000 rubles in cash and “communications equipment, correspondence and negotiations with a senior officer of the Ukrainian intelligence services” containing instructions for assembling explosive devices and coordinates of the site of the attack.

The South Stream project envisaged laying a pipeline across the Black Sea from nearby Anapa to the Bulgarian port of Varna. It was supposed to be completed by 2015, but it never happened. Instead of South Stream, the route to Turkey, called Turkish Stream, was laid on the seabed from the Anapa region. The section affected by the planned attack supplies the natural gas to the Turkish Stream pipeline.