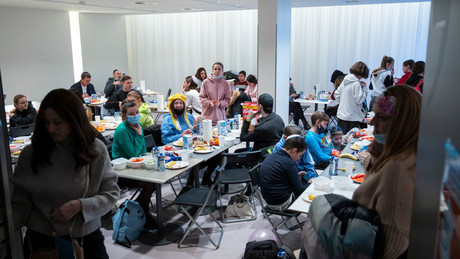 Asylum seekers who live alone in collective accommodation have received less money in recent years. This was justified with possible savings: For example, the residents could shop and cook together. Unrealistic, says the Federal Constitutional Court.

Single asylum seekers can no longer have their social benefits cut by a flat rate of ten percent because they live in a refugee home. The Federal Constitutional Court announced on Thursday that it was not apparent that savings would or could actually be achieved there through joint management. The special needs level introduced on September 1, 2019 violates the fundamental right to guarantee a decent subsistence level.

The decision in the proceedings with file number 1 BvL 3/21 was already made on October 19, but was only made known to the general public on November 24 in a press release.

The federal government in office in 2019, made up of CDU/CSU and SPD, was of the opinion that communal management could be expected in the collective accommodation. Savings effects exist, for example, when eating, “by buying groceries or at least the basic kitchen needs together in larger quantities and using them together in the communal kitchens,” as the explanatory statement states. As a result, the benefits paid have been reduced – in the same way as for those in need who are married or living with a partner.

The specific case involved a man from Sri Lanka, born in 1982, who has been living in shared accommodation near Düsseldorf since 2014. For him, there is a provision in the Asylum Seekers Benefits Act that applies to all people who have been legally resident in Germany for at least 18 months. The Karlsruhe decision therefore directly affects only this group.

According to the Constitutional Court, all those affected whose decisions are not yet final at this time will receive more money retrospectively from September 2019. This is the case if someone has lodged an objection or sued. In all other cases, the decision for future benefits must be taken into account.

The procedure was initiated by the Society for Freedom Rights (GFF). In order to have the regulation checked in Karlsruhe, she had drawn up a template, which a judge at the Düsseldorf Social Court had used here. There the man from Sri Lanka sued for higher benefits for several months in 2019 and 2020.

Affected people who live in collective accommodation currently receive 330 euros a month. Other single asylum seekers are entitled to 367 euros.