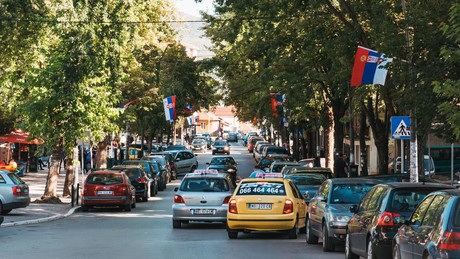 With the mediation of the EU, Belgrade and Pristina have reached an agreement in the dispute over license plates in the breakaway province. According to Brussels, politicians in Kosovo will stop “further actions” to abolish the number plates issued by Belgrade.

An agreement reached in Brussels late on Wednesday could ease the recent high tensions between Serbia and the breakaway province of Kosovo: EU and US representatives managed to persuade the ethnic Albanian government in Pristina to abandon its plan to use Serbian license plates to replace.

“We have an agreement,” wrote EU foreign policy chief Josep Borrell on Twitter, thanking the negotiators from Belgrade and Pristina for agreeing on “measures to avoid further escalation.” According to Borrell, Serbia will stop issuing license plates for Kosovar cities, while the breakaway province will “stop further measures related to the re-registration of vehicles”.

We reached an agreement between #Kosovo other #Serbia today that will allow to avoid further escalation. We will discuss next steps within the framework of our proposal for normalization of relations between the two parties. pic.twitter.com/YQ7vVWPOgT

Borrell added that this gives Belgrade and Pristina an opportunity to focus on “normalizing” their relations and stated that more meetings would take place in the coming days. Belgrade and Pristina are to conduct negotiations, mediated by Brussels, which should ultimately persuade Belgrade to recognize Kosovo as an independent state, which Belgrade has so far refused to do. However, the EU diplomats have already signaled to Serbia that recognition is officially a prerequisite for joining the international community.

The EU chief diplomat also announced that he would invite both parties in the coming days to discuss the EU proposal, also supported by France and Germany.

The current deal now ends Pristina’s threats to fine Serbs in Kosovo €150 if they do not possess Kosovar license plates and documents, explained the Serbian negotiator Petar Petković Serbian media. He added that Kosovar Prime Minister Albin Kurti “accepted everything” that he had previously rejected. Petković emphasized:

“We have managed to maintain peace and stability.”

While Serbia has agreed not to issue new license plates, none have been issued in the past three years and the existing ones will continue to be used, he added.

Current tensions began when Kurti announced the ban on Serbian license plates in late July, claiming it was a “rule of law” matter. Serbian President Aleksandar Vučić recently claimed that Kurti was only interested in recognition and that his refusal to honor his commitments had doomed all talks to failure. After Tuesday’s failed talks, Borrell actually agreed with Belgrade and blamed Pristina for rejecting the EU proposal.

After the agreement was announced on Wednesday evening thanked Kosovar President Vjosa Osmani thanked the US envoy in Pristina Jeff Hovenier and the US government for their “essential” support and “active engagement”. Kurti initially postponed the implementation of the license plate regulation by 48 hours on Tuesday at the request of the US envoy.

An EU-Western Balkans summit is also scheduled to take place in Albania’s capital, Tirana, in two weeks’ time. The region’s prospects for EU membership will then be discussed again.

More on the subject – Vučić: The West is urging us to accept Kosovo’s UN membership