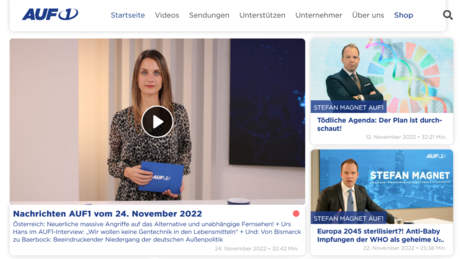 The Austrian television channel “Auf1”, which is critical of the government, seems to have become the focus of state media supervision. Formal legal reasons are given for the investigations; so an approval for broadcasting should be missing. The action taken by the authorities does not appear to be an isolated case.

As Austrian media reported in the last few days, the media supervisory authority “KommAustria“Investigations against the online broadcaster Auf1 from Linz and the Upper Austrian regional broadcaster RTV2 recorded.

There is a suspicion that Auf1 – which, according to the broadcaster’s own information, means “Alternative Independent Television, Kanal 1” stands – distribute his program without permission. The media supervision have profile approvedthat proceedings have been initiated against the station, which is politically right-wing. So far, however, there has been nothing to be found in the press releases of KommAustria. Specifically, the allegation is that the content of Auf1, which operates purely as an online broadcaster, is also broadcast terrestrially via the Upper Austrian regional broadcaster RTV. However, Auf1 does not have a license for terrestrial broadcasting. It is said that KommAustria’s decision is still completely open. If the authorities decide against Auf1, this should mean the end for terrestrial distribution via RTV, online access to the programs would obviously not be affected.

All press reports on the proceedings against Auf1 emphasize that since the start of its broadcasts in May 2021 – at the height of the Corona crisis – the medium has “repeatedly spread unproven conspiracy myths and the crudest allegations”, such as the allegation by profil. The “apocalyptic mood” is calculated while doing business with it at the same time: In the onlineShop Auf1 does in fact offer “emergency generators and canned food” among other things.

The content profile of the station is determined by criticism of the state corona measures, the mRNA vaccinations, but also Western Russia policy, currently the Ukraine war. The program is also at odds with the mainstream when it comes to other social and economic issues. Like the standard writes, KommAustria initiated a “content check” of the channels Auf1 and RTV as early as February 2022. It is about “possible violations of the Audiovisual Media Services Act (AMD-G) with regard to journalistic due diligence”. According to the press, KommAustria took action against Auf1 and RTV because of “substantial complaints”. Both broadcasters would now have to submit video recordings of the offending programs for “preliminary testing”.

Regardless of how Auf1’s reporting critical of the measures is to be assessed, it is clear that Stefan Magnet is behind the station, as profil puts it, “a well-known head of the extreme right”. Magnet was a member of the right-wing extremist “Bund Freier Jugend” (BfJ) and did not distance himself from this association, nor from his “earlier contacts with neo-Nazis like Gottfried Küssel”. Magnet, who is the editor-in-chief of Auf1, runs an advertising agency and has good contacts with the FPÖ. The funding of Auf1, which is to be donated callsbe unclear.

However, KommAustria’s action against Auf1 and RTV is not an isolated case. The broadcaster ServusTV, against which proceedings have been pending since April 2022, is also affected by a content review runs. In this case, too, a complaint had given the impetus for the investigation. The Austrian “Presseclub Concordia” had suspected in a “statement of the facts” that the satirical weekly comments of the Servus director Ferdinand Wegscheider (Der Wegscheider) “did not correspond to the principles of objectivity, diversity of opinion and journalistic care[n] and thus violated the Audiovisual Media Services Act (AMD-G)”. At ServusTV you can see the review by the Austrian media supervisory authority calmly – and will continue to cooperate with ORF on sports broadcasts. ServusTV heard the media company “Red Bull Media House”, a subsidiary of the Austrian Red Bull group.

More on the subject – Austria: Resignations after revelations about corruption affairs between the media and politics