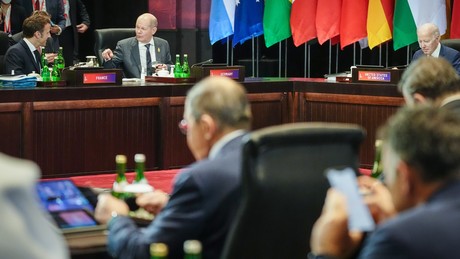 An analysis by Kamran Gassanov

The G20 summit is over. Some pundits had high hopes for the talks in Indonesia because they thought Joe Biden could have a face-to-face talk with Vladimir Putin about Ukraine there. A few days later, however, it turned out that Putin will not travel to Bali. He had Russia represented by Russian Foreign Minister Sergei Lavrov.

In fact, the absence of the Russian president did not automatically mean that the negotiation process would fail. Those who were interested definitely had an opportunity to submit their views or suggestions through Lavrov. Ultimately, the behavior of the French and German heads of government has shown that Western Europe is at least looking for every opportunity to end the Ukraine conflict as quickly as possible.

Emmanuel Macron and Olaf Scholz were able to have a brief conversation with the Russian minister. In addition, the German Chancellor subsequently announced that he would not stop seeking dialogue with the Kremlin. Macron is trying to create the conditions for talks both directly through Lavrov and through the Russian partners. In a meeting with Xi Jinping, the French President asked him to bring Putin to the negotiating table. Interestingly, Turkey had been the main facilitator in all previous months. She organized a meeting between the Russian and Ukrainian delegations in March and helped negotiate a “grain deal” by the end of the summer. At the G20 summit, however, the mediation initiative came more from the Franco-German tandem.

Macron and Scholz’s exploration of the situation is not an accidental episode, but a deliberate strategy. Macron has been in contact with the Kremlin since the beginning of the military operation in Ukraine and is pushing for a diplomatic solution to the crisis in Ukraine. According to some reports, the French President tried to persuade Vladimir Zelensky to make concessions and compromises for a peace solution. Scholz is less independent in his decisions due to pressure from eastern NATO members and the US, but he has also had a hot line with President Putin and is a supporter of diplomatic solutions. On November 12, after a conversation with Vladimir Putin, he declared that he would “not let any critic stop him from having long telephone conversations with the Russian president.”

The reasons for the activity of France and Germany on the diplomatic track are threefold: the crisis within the EU, the situation at the front and the position of the United States.

Europe is in an economic crisis. Eurozone inflation hit 10 percent in September, a record high since the founding of the European Union. The European Commission has lowered its forecast for eurozone GDP growth from 2.7 percent to 0.3 percent. Europe is heading for a recession in the fourth quarter of 2022, announced EU Economic Commissioner Paolo Gentiloni on the eve of the G20 summit. Financial and economic difficulties are reflected in political crises. The UK has already changed prime ministers twice since the start of the G20 summit. The Estonian Prime Minister has resigned. Italian Prime Minister Mario Draghi, who threatened to keep Putin out of Bali, has also lost his post, clearing the way for the “nationalist triumvirate” of Giorgia Meloni, Matteo Salvini and Silvio Berlusconi. All of this political unrest in Europe is triggered by anti-Russian sanctions and the resulting inflation, falling production, capital flight to the US, unemployment and fuel shortages.

The situation on the front lines occasionally inspires optimism among Ukraine’s supporters – especially during the offensives towards Kharkov and Kherson – but still entails more costs than benefits. The risk of a direct clash between Russia and NATO remains high. The heads of state and government of France, Germany and the United States regularly discuss the inadmissibility of nuclear war, although they themselves increase the occasions for a head-on collision. The blasting of the Nord Stream pipelines was the first serious challenge. Another incident occurred on the day of the summit: a Ukrainian anti-aircraft missile landed on Polish territory.

So far, thanks to the level-headed reaction of the opposing party, it has been possible to keep the balance on the edge of the abyss. Russia has not retaliated for the blowing up of the pipelines in the Baltic Sea, and Biden and NATO Secretary General Stoltenberg have dismissed the theory of a Russian attack on Poland. However, without peace or a ceasefire, Russia and the US/NATO are left with a powder keg.

In conventional warfare, despite the tactical successes of Ukraine’s armed forces in Kherson and Kharkov, there cannot and will not be a convincing victory for Kyiv. As Russia retreats towards the Dnieper, it retaliates towards Donetsk. The redeployment of the Russian army is not accompanied by heavy losses of personnel and equipment. And this reality is recognized in Berlin, Paris and Brussels.

While at the beginning of the crisis the restrictive stance of the USA acted as a catalyst for the European sanctions against Russia and arms deliveries to Ukraine, Washington has now slowed down. In addition, the Biden administration itself is negotiating with Moscow. In addition to a meeting between CIA chief William Burns and Russian foreign intelligence director Sergei Naryshkin, National Security Advisor Jake Sullivan is also known to be holding talks with Nikolai Patrushev and Yuri Ushakov. Biden’s main incentive for staying in touch with the Kremlin through the security services is to prevent a possible escalation and expansion of the Ukraine conflict into a global conflict. Zelensky’s talks with Putin, which Biden is urging the Ukrainian leader to hold, are an indispensable tool to prevent an escalation between the US and Russia.

The White House “change of wind” is also linked to a lack of support from US allies in the Middle East and partners in Asia. Despite Washington’s threats and pressure, China and India continue to buy Russian energy resources. The Gulf States are not following the US example either – together with Russia they cut oil production by 2 million barrels a day on October 5th. China, India and the Gulf States, as well as NATO member Turkey, are expanding ties with Russia. Turkey, Qatar, the United Arab Emirates and Bahrain are also offering to mediate in the Ukraine crisis.

Domestic policy orientations in the USA have a certain, albeit not decisive, influence on the position of the Biden administration. Even if the Republican victory in the House of Representatives was not convincing, a slight advantage in their favor is perceived as “Biden’s defeat”. A strengthening of the Republican position would make it more difficult to transfer arms and funds to Ukraine. Republicans could call for even military burden-sharing with European EU countries, which are reluctant to do so given their own financial and economic crises.

Given the ineffectiveness of American and European policies in Ukraine, it is only natural that NATO leaders are looking for an opportunity to explore a political solution to the conflict. Scholz and Macron’s talks with Lavrov are clear evidence of the EU’s will to diplomacy. Moscow is open to this, and the Russian President has said so. However, the harsh rhetoric of Kiev is becoming a serious obstacle in this process. The demands made by Zelensky, in particular the withdrawal of Russian troops and complete “de-occupation”, which for Moscow means handing over not only the four newly incorporated Ukrainian regions in the east and south, but also Crimea to Kyiv, are fundamentally impossible to fulfill. France and Germany are unable to pressure Zelensky, and Ukraine continues to enjoy the support of NATO hawks in the form of the US, UK and Poland.

Although the Bali summit meeting did not bring a breakthrough, it did create a certain basis for a political solution to the Ukraine crisis. EU leaders have announced their intention to continue dialogue with Russia. The US is in the same mood but has so far exerted influence through closed channels. For the process to continue successfully, concessions are needed from Kiev. And without collective pressure from the EU and the US on Zelensky, it is impossible to achieve these goals.

While Scholz, Macron and Biden are not taking active steps to persuade Zelensky to compromise, the Poles and the British will take advantage. Poland and Britain are extremely uncompromising and expect Ukraine to fight to the bitter end. As soon as there are signs of negotiations, Warsaw and London stage acts of sabotage and provocation. It is no coincidence that the information about Russia’s alleged attack on Poland was circulated on the day the final G20 declaration was agreed.

Translated from the Russian. First published by Vsglyad.