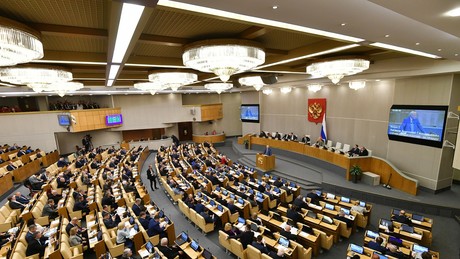 The State Duma (lower house of the Russian parliament) unanimously passed a law in the third and final reading that bans propaganda for partnerships that do not correspond to the heterosexual relationship model. Violations can result in high fines.

According to a document published on Thursday, around 400 lawmakers have approved the bill, which will ban propaganda promoting non-traditional sexual relations, pedophilia, but also information that could induce a desire for a gender reassignment. Propaganda will be banned among both minors and adults, was called it in the paper. The law also prohibits the dissemination of information about the LGBT community in the media, the internet, advertising, literature, cinema and audiovisual services.

According to the new regulation, it will be impossible to show films in Russia if they contain prohibited content. In addition, the law prohibits the sale of goods, including imported goods, that contain prohibited information. Access to LGBT-related content distributed via paid services must therefore be restricted for young people under the age of 18. This now sets a requirement to enter codes or otherwise verify the user’s age.

Vyacheslav Volodin, Chairman of the Russian State Duma, wrote on his Telegram channel:

“The decision will protect our children, the future of the country from the darkness being spread by the US and European countries. We have our own traditions and values.”

In a session of the House of Commons, Volodin said US Secretary of State Anthony Blinken had previously contacted MPs and asked them to withdraw the bill. The unanimous ban on the promotion of same-sex relationships was the “best answer to Blinken”.

Violations of the law can result in high fines. For example, for LGBT propaganda on the Internet and in the media among children, the fine is up to 400,000 rubles (about 6,400 euros) for natural persons and up to five million rubles (more than 79,300 euros) for legal entities. Foreigners face a fine of up to 400,000 rubles, 15 days in prison and then expulsion from the country. Russia’s media regulator Roskomnadzor will be tasked with approving the process of monitoring the internet to identify content to which access should be restricted.

More on the subject – Videos of killing of Russian soldiers: State Duma calls for international condemnation