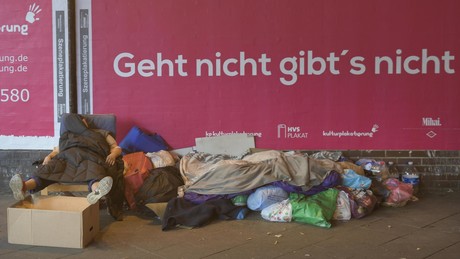 The economic expert and DIW boss Marcel Fratzscher warned that inequality is currently growing even faster than during the pandemic. More and more people are falling below the poverty line, which experts say has fatal consequences for society.

That more than ten million people, including several million children and young people, are at risk of poverty in one of the world’s wealthiest countries is fact and shocking enough. But it also shows that the tendency towards an enormous gap between rich and poor in Germany can be increased even more than during the pandemic. The consequences of the corona pandemic hit those who had little anyway. In the second year of the pandemic, the poverty rate rose to over 16 percent of the population.

Currently, with record inflation, it is the people who are losing most who already have little and are at risk of poverty, so that inequality is increasing even further. There have often been warnings about the gaping scissors that have been widening for years. However, the extent of inequality during the pandemic is currently being exceeded, emphasized Marcel Fratzscher, an expert in macroeconomics and President of the German Institute for Economic Research (DIW). Around 40 percent of people have no reserves.
“The social gap is currently widening, even more so than during the pandemic,” Fratzscher told the Bayern media group.
And again, those who have the least are hit the hardest. The top economist spoke of anti-social effects:

“The record high inflation, for example, seems extremely antisocial because people on low incomes suffer much more from it.”

In October, consumer prices rose by 10.4 percent compared to the same month last year, which is the highest price increase to date for about 70 years was reached. This alone is a problem for a large part of the population, as almost every second consumer recently stated in a survey by the management consultancy EY that they only buy the essentials because of the exploding cost of living.
But for the many citizens whose incomes are low, the impact of inflation is three times greater than for those with high incomes, because most of their money is spent on the most basic needs, such as energy and food.
In the economy, too, small businesses are particularly hard hit by the restrictions.

“Some of the big ones are making big profits even in these times, while many medium-sized companies, the small ones, the bakery around the corner, can hardly make ends meet.”

Fratzscher therefore advocated a “targeted distribution policy” instead of watering can measures.

And even before the record rate of inflation, the proportion of poor people in Germany had risen sharply, as a study published on Thursday by the Institute for Economic and Social Sciences (WSI) shows. According to the 2022 distribution report, poverty in Germany had already increased significantly in the past decade. According to the authors, the inequality was so dramatic that “the foundations of our democratic coexistence are beginning to falter”.

“In 2019, more people in Germany were affected by poverty than ever before,” summarized Dr. Dorothee Spannagel and Dr. Aline Zuco, the authors of the distribution report, summarize the results of the study. Although the years between 2010 and 2019 were characterized by good economic development and falling unemployment, poor households would not have benefited from this. They fell even further behind.

The poverty gap – i.e. the amount that an average, financially weak household lacks to mathematically leave the poverty line behind – has increased for a one-person household from 2,968 euros in 2010 to 3,912 euros in 2019.

Again and again, associations and experts raise the alarm. The Social Association Germany spoke of worrying numbers. The Paritätische Gesamtverband has already warned that poverty in Germany will have reached “a sad new high” in 2021. According to figures from the Federal Statistical Office, around 13 million people in Germany were at risk of poverty last year. That corresponded to 15.8 percent of the population, in other places even slightly higher numbers could be read. According to the EU definition, people are at risk of poverty if they have less than 60 percent of the median income of the entire population. According to the Federal Working Group for Catholic Youth Social Work (BKJ), a worryingly high proportion is affected among the minors in the country, for whom the argument of insufficient performance, which is often put forward despite facts being refuted, is even less valid. Accordingly, without social benefits in the past year, 37.2 percent of minors were at risk of poverty. If social benefits were taken into account, more than every fifth person under the age of 18 still had to be recorded. In the age group of 18 to 25 year olds it was even 25.5 percent.

And it is not only in terms of money that poor households are disadvantaged. As the WSI study made clear, health and education as well as life satisfaction are measurably lower than the population average, as is trust in state institutions. This showed once more – than just in terms of purchasing power – that poverty is not just a problem for the poor, but affects society as a whole. The scientific director of the WSI, Bettina Kohlrausch, made it clear once again:

“Poverty and social polarization can shake the foundations of our democratic coexistence, especially if they become entrenched.”

In fact, in a survey by the Böckler Foundation, only 59 percent of the poor agreed that democracy generally works well in Germany, and only 68 percent thought it was the best form of government. According to Kohlrausch, more commitment against poverty is not only necessary to help those directly affected, but also to keep society together. This applies all the more in times of high inflation, when the fear of social decline is driving more and more people.

According to the WSI experts, there is much to suggest that the corona pandemic and high inflation have further aggravated the problems of the poor in recent years. According to a recent study by the Institute for Macroeconomics and Business Cycle Research (IMK), high inflation is currently hitting low-income families in particular. Because the biggest price drivers – household energy and groceries – have a significantly larger share of the entire shopping basket for them than for the wealthy.

According to the Federal Statistical Office, in May of this year there were already three to seven million people over-indebted. The credit agency Creditreform expects a new wave of over-indebtedness in Germany in the coming year. While the experts from Neuss still counted almost 5.9 million over-indebted households in their recently published debtor atlas for 2022, they expect the situation to worsen significantly next year. “An increase in the number of over-indebtedness by around 600,000 cases is not unrealistic,” said the debtor atlas. And it cannot be ruled out that the impact of the back-payment shock for household energy and the difficult-to-calculate duration of the inflationary tendencies will drive even more households into over-indebtedness.

According to the WSI study directors, the federal government’s current relief packages would help a little in the fight against poverty: “Something really matters,” says Spannagel, but measured against the fundamental problems in this area, it’s just a drop in the bucket .