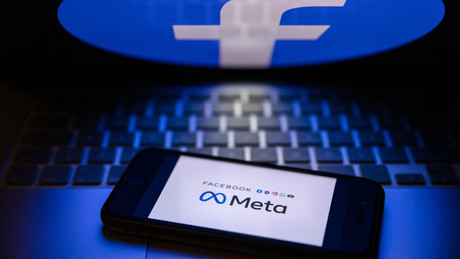 Social media giant Meta Platforms, Inc. has said it has uncovered a network of fake US military accounts used for covert influence operations in countries in the Middle East – but also in Russia.

According to its own statements, the Facebook parent company Meta Platforms, Inc. has deleted hundreds of fake accounts that had been used by the US military for covert influence operations in the Middle East, Russia and other countries. According to a published Tuesday by Meta Platforms Adversarial Threat Report the blocked accounts are said to have been part of a covert US campaign called the “Trans-Regional Web Initiative”. Content was then disseminated through this information network aimed at promoting narratives that worked in the interests of the United States and its allies.

According to the group, the accounts used for influencing were not only discovered on Meta’s own platforms, but also on networks such as Twitter, YouTube and Telegram. “This network originated in the United States and was centered on a number of countries including Afghanistan, Algeria, Iran, Iraq, Kazakhstan, Kyrgyzstan, Russia, Somalia, Syria, Tajikistan, Uzbekistan and Yemen,” the report said .

A formal investigation into these accounts, Meta Platforms said, revealed that those involved in the US military’s propaganda campaign mostly posed as locals from those countries. In order to make the account as real as possible, the US military should even use so-called GAN tools (Generative Adversarial Network), i.e. programs for creating artificial but real-looking images in order to be able to avoid a possible discovery through a reverse image search. It is also noteworthy that the cyber soldiers used their own logos and visual style, and the fake accounts were also linked to other suitable fake accounts on YouTube, Twitter or other networks.

According to the social media giant, the influencer campaign was mainly able to attribute posts written in Arabic, Farsi and Russian, covering news, sports, culture and other current events. “They posted videos, articles, photos and memes about the country they focused on.” While some of these contributions highlighted “US diplomatic and humanitarian efforts in the respective region”, others addressed the alleged “malicious influence of Russia”, “Chinese imperialism” or the mistreatment of “Muslim minorities”. According to Meta Platforms, these fake profiles also shared “posts about the COVID-19 pandemic, some of which we removed for violating our misinformation policy.”

According to the meta report, the operators of the fake accounts spent an average of around 2,500 dollars per ad in order to advertise the deliberately spread false information, which was paid in both US dollars and British pounds. “Although those behind these actions attempted to disguise their identities, our investigations found links to individuals associated with the US military,” Meta Platforms notes. Ultimately, these 39 Facebook and 26 Instagram accounts attributed to the US military, as well as other pages and groups associated with this influence operation, were removed for violating the social media giant’s policy of “platform manipulation and spam.” and prohibit “coordinated, inauthentic behavior”.

Pentagon spokesman César Santiago told US media on Tuesday that the US Department of Defense “is aware of the Meta [Platforms] published report”. However, the ministry “refused to comment on the report’s findings at this time,” Santiago said. “We will review and evaluate all information that Meta provides.” Meta Platforms itself has Meanwhile, the results of the formal investigations have been made available to researchers at Stanford University, who now want to further evaluate them together with the company Graphika for social media analysis.

Back in August, these researchers had one report published that accounts on Facebook, Instagram, Twitter and other social media platforms used “fraudulent tactics to promote pro-Western narratives in the Middle East and Central Asia”. These posts on the US military-run fake accounts generally concerned “sports and culture in a particular country, cooperation with the United States, including military cooperation, and criticism of Iran, China or Russia”. The researchers concluded at the time that this is “the largest case of pro-Western social media influence that has been studied and analyzed by open-source researchers to date.”

In general, it was previously assumed that such influencing campaigns were primarily carried out by authoritarian regimes. However, both the current Facebook report and the one published in August by researchers at Stanford University shed light on the “much broader range of actors” in this area. In September, after the Pentagon received numerous complaints about US military attempts to influence overseas populations based on previous reports, the US Department of Defense ordered a review of its “information warfare” program.

Because the blatant spread of misinformation could undermine US credibility Colin Kahl, Secretary of Defense in the US Department of Defense, instructed the commands involved in psychological operations to provide comprehensive reports on their activities. On behalf of the US government, Kahl should find out what types of online influence operations were carried out, what tools were used, who was targeted and how effective these social media campaigns were.

At the time, some campaigns were attributed to the US Central Command and concerned in particular anti-Russian and anti-Iran propaganda. “These campaigns consistently promoted narratives that furthered the interests of the United States and its allies, while targeting countries such as Russia, China and Iran: The reports particularly criticized Russia for the deaths of innocent civilians and other atrocities committed by its soldiers in pursuit of the Kremlin’s ‘imperial ambitions’ following the invasion of Ukraine in February of this year,” said the Stanford researchers’ final report at the time.

The US military’s PsyOp campaign “also shows the limitations of using inauthentic tactics to generate engagement and influence online,” the researchers said. Most posts were shared very little: a tweet received an average of 0.49 likes and 0.02 retweets, and the two most popular accounts even publicly stated that they were connected to the US military. It is true that Meta Platforms regularly publishes reports in which the group explains in detail how it is proceeding against any misinformation campaigns. However, this is the first known instance in which the United States has been cited by the company as a source of such disinformation.